I haven’t posted in a while because I have been working on nothing but patterns and fittings which aren’t the most exciting moments of shoemaking (in my opinion). After giving it thought I realized I should explain the birth of a new shoe in my process. There are various ways to approach pattern making for shoes and boots but I mainly use a tape method.

It all starts with taking the last that the shoe will be made on and covering it in tape. 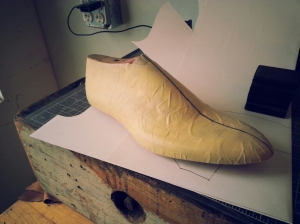 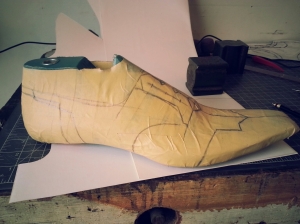 The above pattern has both the linings and upper design drawn and it can get busy or a little confusing depending on the design and lining patterns created. This particular design above is a re-do of a art deco inspired shoe, after which the customer and I decided to alter the original pattern.

Once every line looks symmetrical and the design looks cohesive it is time to cut on the center lines dividing the last, followed by the removal of the tape design onto paper. 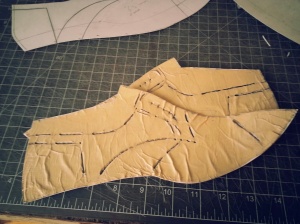 Here I have the outside and inside pattern of the upper and lining.  First I cut on the lines and open them up allowing me to use them as stencils to trace the outlines. I trace the outside first then put the inside over the tracing and line them up as best as possible and trace again. The lines won’t coincide perfectly but where they deviate from one another a line is drawn between and the middle line is found. Do this everywhere and you get the pattern key like this: 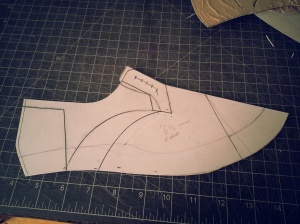 Every pattern piece is cut from this key. Example below: 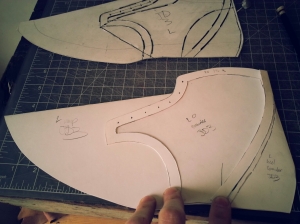 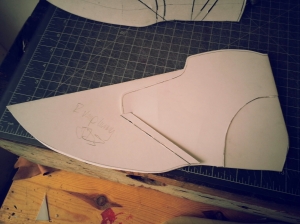 So that’s about it! It just takes a while to even out and make nice with the design details and even longer for me to decide to go forward with a new design.

This entry was posted in Shoemaking. Bookmark the permalink.

2 Responses to Patterns and more patterns