…the most common of shoe constructions and my favorite due to design versatility and rugged durability. Below is a image of a freshly welted shoe just before I trimmed the waist & toe areas of the welt to give more pronounced shape.

Welting is the process of sewing a strip of leather to the insole & upper around the shoe. Many people know this as “Goodyear Welted” because in the mid-late 1800’s Charles Goodyear Jr. invented the modern day machine that mimicked this method. There are some major downfalls to the Goodyear machine that make it less desirable to a properly handsewn version. The majority of Goodyear welted shoes use a method called “gemming” where a strip of canvas is sewn to the insole then the welt and upper are sewn to the canvas; not as reliant or durable as the handsewn counterpart. Combine this with the fact that sewing machines have no way of changing needle direction so 2 threads are required ( a top and bobbin thread) which inherently will have tension issues, whereas handsewing is one thread with needles/bristles attached on either ends allowing for tight stitching throughout. Example: 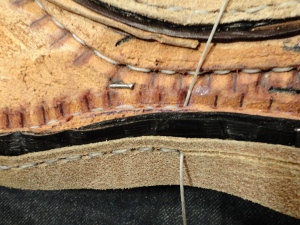 Sorry for the short post but the past couple weeks were plagued with hold-ups and some work had to be thrown to the wind due to quality control so I haven’t anything new to show. Next week will be better!

This entry was posted in Shoemaking. Bookmark the permalink.

2 Responses to the English Welt